I don’t really consider myself as someone who wins things. True there was the under 11s photographic competition highly recommended back in 1971, a Puffin Book Club prize for something completely forgotten and some near misses with school raffles, but being the actual winner? Nah. Not something that happens that often.

By January 2017 I’d also been languishing in what felt like complete avoidance from all the agents and publishers I’d submitted to. Rejection is one thing but nothing? I’d not heard a peep from any of them and was seriously doubting myself and my capabilities as a writer. So when a flurry of excitement about a picture book challenge appeared online I was at first rather reluctant to join in.

The Society of Children’s Book Writers and Illustrators regularly hosts a Slush-Pile Challenge. Unpublished and un-agented writers (i.e. ME!) can submit a piece of work which might get selected to be read by a real life proper agent who knows what’s what. The brief set by Jodie Hodges of United Agents was fairly straightforward. She was after a picture book text that featured a human child at its heart (so, no animal protagonists). A story that young children and their parents could read together that would make them laugh or cuddle, or both. Surely I would be able to find something suitable?

Having written nothing new for several months I looked back into my archive. Picture book challenges don’t come along every month so I felt I had to submit, but which one? The tortoise one? Not human enough. The space one? Not ready enough.  I did have one though which seemed to fit the bill. 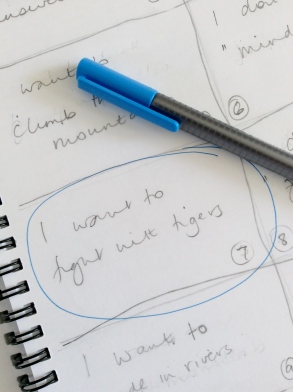 “Where’s That Tiger?” started life in 2015 as an exercise at the Arvon picture Book retreat. During a workshop on rhyming structures I’d scribbled some frankly painful couplets, but the kernel of an idea was there. Almost a year later I was at a SCBWI masterclass with Ellie Brough, which brought it back to mind so I’d worked on it again. I don’t usually write in rhyme but it was finished and in reasonable shape. One click later it had gone.

May 2nd 2017: Hope dashed. Part of the challenge is also to be one of the randomly selected manuscripts. My story wasn’t one of the 25 that went to Jodie. I tried hard to be philosophical about this and console myself with feeling positive I’d entered in the first place.

May 11th 2017: Hope rises again. More stories are going forward! Mine is one of them…I was just a teensy bit excited.

June 3rd 2017: “I’m delighted to inform you that you’ve won”.  And breathe. I sat in bed and read Jodie’s comments over and over again.

“This entry had a fabulous, commercial, appealing central concept, a really strong rhyming voice, a great page turn moment from spreads 6 to 7 and the clever added bonus of the narrative slowly taking the protagonist and reader to bed. I always like a text to end with a twist, a cuddle or in bed!’”

An actual literary agent had said that? About my story? I was elated.

There followed a really hard 24 hours of radio silence in which I had to ignore my critique group who were busy chatting about their “sorry you didn’t win” emails and wondering who had, then a flurry of congratulations and finally the prize itself: a meeting with Jodie to discuss my work. In advance she had asked if I wanted to share a couple of additional texts so I had sent her the tortoise one and the space one as a follow up. She was able to meet with me quite quickly so I arranged time off work and underlined it in my diary in triplicate. With stars.

On the day  of the meeting I was, as ever, ridiculously early which turned out to be a good thing as finding United Agents was a bit tricky. I wandered up and down the street for a while looking rather out of place amongst the Soho hipsters but eventually I located the secret doorbell and was settled into Jodie’s book lined office with a nice cup of tea, feeling like a real fraud! Jodie was a great host however and we spent nearly two hours discussing writing and the whims of the publishing world. One of the things I struggle with is finding a killer title and she helpfully talked through the titles of her successful books and how they take the reader straight to the heart of the story itself. The rise of illustrated non-fiction was also something we explored in relation to some of my ideas. She was very encouraging about my own stories and offered great insights on how they can be developed to increase their commercial appeal. I came away from the meeting with a head full of ideas and a real sense of positivity and encouragement to keep writing.

So I’ve wiped the slate clean and decided to move on from all those unanswered submissions. You’ve got to stay in it to win it.

2 thoughts on “Sometimes you win…”

Unauthorized use and/or duplication of this material without express and written permission from the owner is strictly prohibited. Excerpts and links may be used, provided that full and clear credit is given to the owner with appropriate and specific direction to the original content. © Chez l'abeille.