Not that kind of ghost – although according to Sam Roberts, aka Mr Ghost Signs, it has been known for people to take part in his walks expecting to see half visible glimpses of things past. Actually, they wouldn’t be that wrong really – but these are a different kind of ghost.

In the days of late 19th Century through to the mid-20th Century as businesses grew, advertising began to emerge in the form of painted signage. These old, fading signs can still be glimpsed in the high streets of our London villages and Stoke Newington is full of great examples.

I was lucky enough to get a spot on Sam’s last ever Stoke Newington guided walk – he’s hanging up his walking shoes for now, but if you want to follow in his own ghostly footsteps, the tour can be accessed via a rather good app. It’s highly recommended, and you can also download the sister walk around Bankside and Borough. If you want a peek into that then check out this post!

So here are a few of my favourites from the walk on a rather grey, damp day in early April. 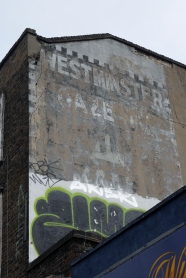 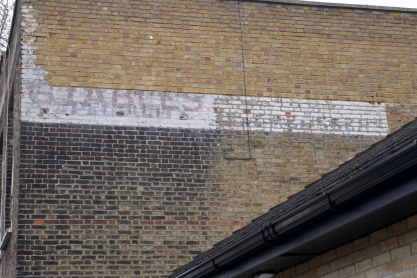 The Westminster Gazette/ Army Club sign was the first on we saw, just up the hill from Stoke Newington train station.  Both this sign and the other nearby on at Willow Cottages are both examples of what Sam calls a palimpsest – different signs painted over each other. As they age the layers of paint fade and disappear at different rates allowing the signs underneath to come through. Westminster Gazette is also above a current newsagent, suggesting that this may have been the purpose of the business for some time.

Heading back down the hill we found the next cluster. 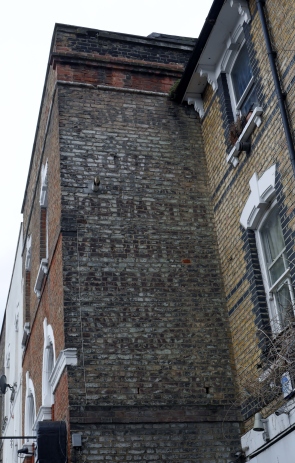 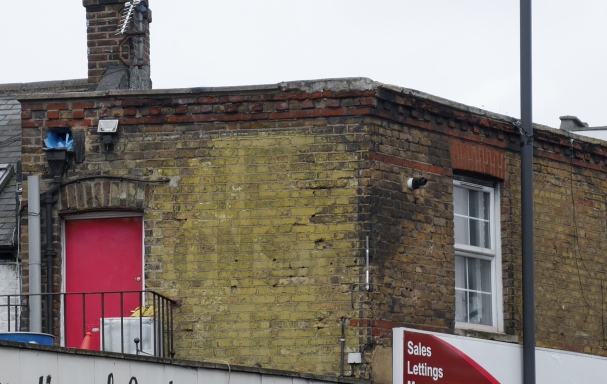 At the start of the walk we were warned to “use our wing mirrors!” Sam wasn’t wrong…walking along the streets the signs can be tucked in all sorts of spaces. originally they would have been placed in full view of shoppers and also up high to be visible from the train lines. With the continued rebuilding that occurs, many are now truncated or hidden from full view, as was the case of the Yates and Sons, dyers sign, which seems to have a door built right in the middle!

The furthest point down the High Street took us to one of the most spectacular of the existing signs: Cakebread Robey on Tyssen road. Sam’s research indicates there are at least three layers in this sign, all for the same firm. Again white paint was used to cover up existing signage and the lighter top coats are fade first. In 2016 A “light capsules” project developed projections of the signs which gave them a semblance of their former magnificence. I wasn’t able to get to this event, but there are pictures on the Ghost signs website if you want to see them.

Heading back and along Stoke Newington Church Street we came to the final cluster. 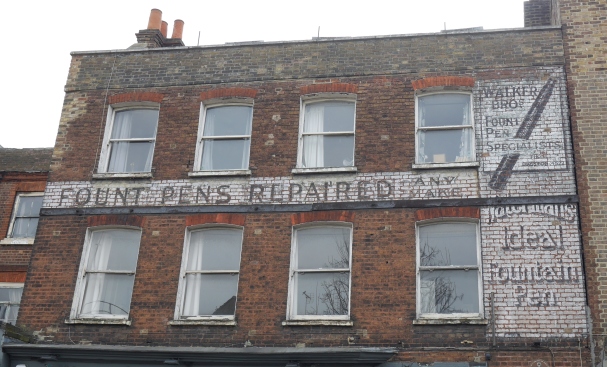 My favourite ghost sign of the whole walk was saved until last. I’ve just started reusing my original fountain pen, which saw me through O levels, A levels AND my degree…from the days when having a decent pen was an important element of your school pencil-case! I also remember having fountain pens which came with a built in lever to ensure maximum filling, which probably had enough tiny parts to make mending them a specialist trade.

A couple of hours is plenty of time to complete the walk which includes several other signs not shown here – for the full experience you’ll just have to go and find those ghosts for yourself.

“It is easily overlooked that what is now called vintage was once brand new.”

The cover of January’s “Which” magazine was asking a rather big question recently: “Which brands stand the test of time?”
I guess we only have to open the kitchen cupboards to answer this. A quick survey of my kitchen reveals Birds custard, Tabasco Sauce and Bournville cocoa powder, all longstanding familiar brands from childhood to today. However the best place for a stroll through your own sensational history is definitely the Museum of Brands.

There’s something rather fabulous about stepping back into your own past. To walk through the “Time Tunnel”, where the museum’s extensive collection is displayed, is also a walk down the collective memory lane.
My main reason for going to the museum was to see the collection of jigsaw puzzles, but in fact I was totally absorbed by the retro packaging and designs. As I moved into the sixties and onwards, sensations were continuously triggered. Memories of sweet tastes or vile ones, good times or bad; the objects created a shared cultural experience that got visitors talking and swopping personal stories. I had a hilarious shared moment with some Australian visitors over the Sixties food packets and memorabilia on display.
The museum has two main parts – the Time Tunnel which walks you through design and branding by decades, from the 1800s to the present day and an exhibition of designs which traces the evolution of very well-known packaging.